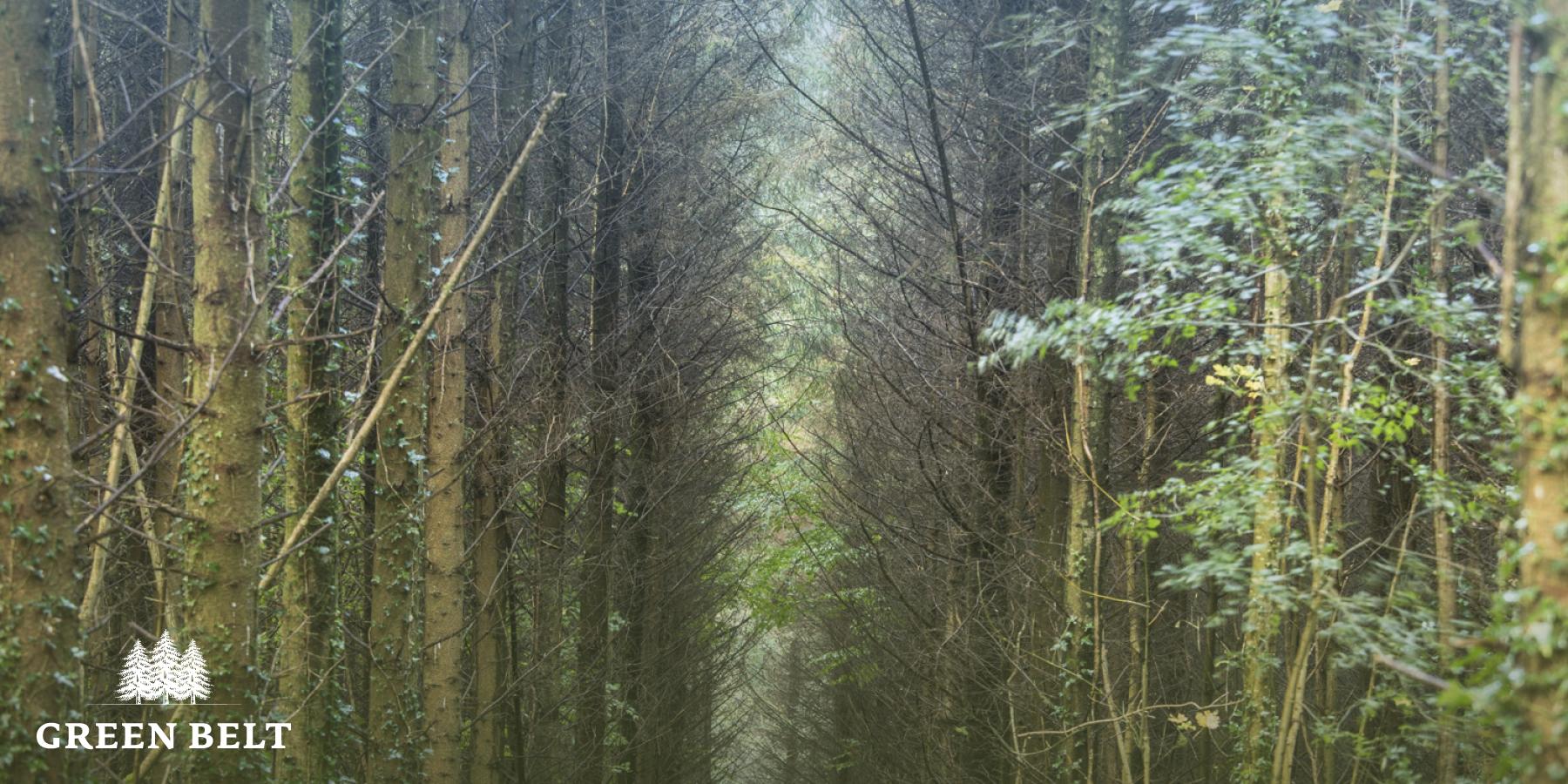 Niall Farrelly, a senior researcher with Teagasc with Walsh Scholar Ronan Cashell write about the potential that improving the Sitka spruce planting stock will result in faster growing trees that utilise resources efficiently increasing carbon sequestration and storage. The increased use of wood and greater levels of recovery of harvested wood products will play a key role to offset emissions from carbon intensive materials and maximise the contribution of forests to reducing our carbon footprint.

Their article is published on the Teagasc website, but has been copied below for ease of reference.

Sitka spruce and carbon sequestration Irish forests can provide many benefits to society, one of the most talked about recently is the role of forests in climate change mitigation. While there are usually trade-offs between production/carbon sequestration and biodiversity objectives in forests. One of the species growing in Irish forests, Sitka spruce has had more than its fair share of publicity in recent years, the benefits of this tree to society and its role in climate change mitigation are perhaps not well publicised. While Sitka spruce is the predominant species used in Irish forests, being a non-native, the species is extremely well adapted to growing in Irish conditions, it loves the rain https://www.outdoorproject.com/united-states/washington/hoh-rain-forests-big-sitka-spruce making it particularly suitable for the mild wet maritime conditions in Ireland. In fact the conditions of the pacific North-west coast of America are somewhat similar to Irish conditions, absence of extreme temperatures, mild conditions with a long growing season above 5 degrees Celsius. The species is particularly home in maritime conditions and the growth rate in Irish forests are truly exceptional, with yields being among the highest recorded for forest tree species achievable; yields of up to 34 tonnes per hectare per year of stem wood have been recorded. With over 300,000 hectares of Sitka spruce planted in Ireland all this biomass growing vigorously represents a significant carbon store, estimated to be 2.5 million tonnes of CO2 equivalent (75% of the total amount of carbon stored in Irish forests).

Old growth spruce forest in the Slieve Bloom Mountains with carbon stored in tree trunks a by-product of photosynthesis.

Protection of the carbon resource and long term storage The protection of this carbon resource is critical, while some of this carbon is lost owing to disturbances, such as fire events and natural tree mortality, damaging agents could cause a serious problem if they became established in Irish forests. Insect pests and diseases could cause trees to die, resulting in carbon release to the atmosphere and forests becoming a source rather than a sink. Recent outbreaks across Europe with bark beetles https://www.reuters.com/article/us-centraleurope-environment-barkbeetle/climate-change-to-blame-as-bark-beetles-ravage-central-europes-forests-idUSKCN1S21LA and more recently the damage caused to Ash plantations in Ireland https://www.agriculture.gov.ie/forestservice/treediseases/ashdiebackchalara/ caused by the disease Hymenoscyphus fraxineus serve to illustrate the danger posed by external factors that could threaten the carbon balance in Irish forests.

The management of forests including the harvesting of timber serves a couple of important functions in the life of a forest. It allows the forests to be re-juvenated to maintain their vigour with “fresh material”, this material may be more adapted for the environmental and biotic challenges of future decades. For a carbon perspective it affords the opportunity for sequestered carbon to be stored over a longer term – safe from biotic and abiotic challenges. If the harvested wood displaces carbon intensive material in buildings or the burning of fossil fuels then you get a double whammy effect “where by the carbon emissions are offset from fossil fuels/carbon intensive materials by sequestered carbon and displaced.

Over 90% of the timber harvested in Ireland is from Sitka spruce forests and many diverse products are produced, ranging from pallets and packaging to timber fencing and construction timber http://www.mtg.ie/. These products contain stored carbon and their shelf life and continued storage depends on their end use. Products with a short life span will decay and release carbon more quickly back to the atmosphere, whereas timber used for construction purposes locks that timber away for a longer period.

Whatever the end use of the wood, the harvested forest needs to be re-newed to continue its good work to capture and store carbon. Forests need to be replanted or new forests need to be established to prevent carbon-leakage, they need to sequester additional CO2 from the atmosphere, the amount dependant on the species planted, the end use of the stored carbon and protection of the resource from damaging agents.

On the whole forest plantations are extremely important to society and an important natural resource in Ireland being a cost-effective, efficient sink for carbon and for the supply of sustainably produced products. Globally forest plantations supply over a third of the world’s timber while occupying only 7% of the land area. They play a vital role in the supply of forest products from sustainable sources, substituting timber from tropical forests assist to halt the rate of deforestation, so it is important for society to utilise sustainably produced forest products which are identified by FSC https://fsc.org/en and PEFC certification https://www.pefc.org/.

While global forest resource are becoming increasingly becoming challenged by the effects of climate change and pests and diseases, there is increasingly a realisation among forest scientists that forest reproductive material needs to be adapted to future climatic conditions and be more resilient to biotic threats. While trees evolve over millennia, those genotypes which are resistant to pests and diseases persevere to thrive, climate change necessitates that future forests are resilient so that they can continue to supply the ecosystem goods and services, including timber and carbon well into the future.

Logs from a Sitka spruce forest which will be used to produce sawlog and packaging products provide a renewable source of timber for society – plantation forests can play a role in halting illegal logging in tropical forests.

The importance of tree breeding strategies There is considerable potential to utilise tree-breeding strategies to select trees that may be more adapted to future climates or have more resilient characteristics. Significant advancements in the area of forest genetics, including the study of genetic diversity and genomic selection which has had widespread application in plants and animal breeding, with potential to provide a better understanding of the differences in the genetic makeup of populations of trees and allowing trees to be selected that are fitter for future conditions, thus ensuring that forests continue to be healthy and capable of addressing future uncertainties and challenges (e.g. https://www.teagasc.ie/crops/forestry/research/ash-resistance-to-ash-dieback/)

For Sitka spruce the most important commercial species in Ireland, a project called GenESIS featuring researchers from Teagasc, UCD, Trinity College Dublin, NUI Galway and the National Botanic Gardens, hopes to document the genetics of Sitka spruce forests in Ireland with the aim to accelerate tree-breeding efforts https://www.teagasc.ie/crops/forestry/research/genesis-project/.

Tree breeding aims to select the best trees to use as parents to produce offspring suitably adapted for deployment to Irish forests. The selection of desirable traits such as faster growth rates, straightness, and better wood properties, all of which offer the potential to increase the output of Irish forests and increase carbon efficiencies, including the increased usage of wood based products to assist long term carbon storage. In addition tree breeding can select populations or individuals that may be more adapted to future climates or have greater tolerance to insect pests or diseases. The research hopes to assess a series of Sitka spruce populations and whether they have genes that control vigour, timber quality and/or the production of substances called metabolites, which affords them increased protection from insect pests and diseases. As Sitka spruce has a wide range of over 3,000 km occurring from Alaska to California with populations isolated by physical geography; it is possible that populations may differ in their genetic makeup and may contain these valuable traits

Many of these populations are available for study in experiments planted out in the 1980s for the purpose of determining Sitka Spruce genotypes with the largest relative gains in height. Initial selection of improved genotypes occurred at 6 years into the stand rotation, and at present the stands which remain are now 28-40 years old. In this period the capacity to categorise and investigate the genetic control of complex traits such as height has increased dramatically, primarily due to advances in genotyping and genomics. Using genomic selection, the genotypes with the greatest capacity for improvement can be identified and a breeding programme with assured generational gains in average height can be implemented.

Genomic selection Advances in genotyping have led to the emergence of genomic selection (GS), a method for maximising the gain in an additive trait achieved from selective breeding. GS uses models built by estimating the effect of alleles on the trait in question, and generally are made more accurate by including more instances of allelic variation. Genomic selection has to date been successfully employed in animals, food crops and even trees, and in the context of Ireland has contributed to increased production of beef and dairy. While conifers, such as spruces, have traditionally been avoided for genomic analysis due to their large genomes in favour of species with much smaller genomes such as Eucalyptus, the advances which allow for GS also allow for the identification of alleles at densities necessary to carry out GS. With the establishment of tree orchards using material from these trials currently happening, the opportunity to use GS to inform the crosses that will give large gains in height is apparent.

Genotype data for GS is being taken from the roughly 215 genotypes from different populations of Sitka spruce some of those currently used in the Coillte breeding programme (in Ballintemple Nursery in Co. Carlow), while phenotype data (desirable traits of trees) is derived from their progeny. Potential exists to incorporate data from the experiments as they are at present which is closer to the final rotation, and as such ongoing measurements have been made on most of the remaining experimental sites.

In collecting the historical and contemporary data, the potential exists to examine whether GS can identify genotypes for future breeding that may show improvements in certain traits such as timber quality or aphid resistance, etc.

Ultimately improvements in Sitka spruce planting stock will result in faster growing trees that utilise resources efficiently increasing carbon sequestration and storage. The increased use of wood and greater levels of recovery of harvested wood products will play a key role to offset emissions from carbon intensive materials and maximise the contribution of forests to reducing our carbon footprint.